.
The most creative power given to the human spirit is the power to heal the wounds of a past it cannot change. ~Lewis Smedes, The Art of Forgiving

This past weekend I knew a lot of emotion would get stirred up in tackling the issue of forgiveness. I talked about a process which included five stages:

We admit our pain.
We assign true blame.
We give up our right for personal revenge.
We recover the worth of another person.
We begin to feel some compassion toward the person who hurt us. 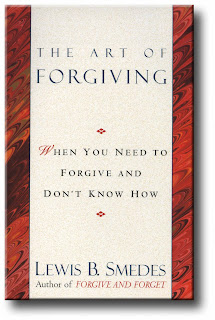 I don’t think these are neither comprehensive or easy to do. But in the end, it’s a matter of obedience in spite of our need for justice. If I’d had more time, I would have tacked on a few of the mechanics I’ve observed about myself in struggling with forgiveness. For instance…

Practice with some small wins

Remember a few months ago when we did the series Perfect Takes Practice? The whole idea was the more we practice a particular behavior in relating to others, the better we simply get. Same with forgiveness: start small. Begin with some easy ones. Forgive the guy who flipped you off on I-75. Practice forgiving the DMV lady with the attitude. Years ago I was waiting in a long line at a bank with a friend where the teller was clearly not excited about being there and moving painfully slow. I said to my friend, “Doesn’t management here train them that they’re here to serve others?” My friend replied, “Yeah. It’s easy for us to forget that too, isn’t it?” Ouch.

Another idea is the obvious: pray, pray, pray. And then pray some more. Remember this one when you’re trying to figure out when to forgive someone who’s deeply hurt you. Timing is everything. I’m suspicious of quick forgivers; I don’t think they’re really in touch with their anger or pain. They may just be in “religious mode”. But don’t wait too long either. Don’t let anger fester into bitterness. Pray. Ask God to help you with the timing. But do something. Pray. Ask God to give you His power to do this. Forgiving a deep wound is like the layers of an onion—you forgive and peel off a layer. Later on, you discover something deeper, and forgiveness is experienced at a greater depth. It’s not really repeating as much as it is deepening.

One more thing: don’t forget the old acronym KISS: Keep It Short, Sinnerboy. When forgiving someone, don’t turn it into a big production. The less you say, the better; just do it in a truly heartfelt way. And please don’t go to someone who isn’t even aware of hurting you and forgive them; you need different kind of conversation with them first. It seems to me that forgiveness works best when we don’t demand a certain response. If the response doesn’t bring the effect or restoration we hoped to get, then we can just enjoy the personal healing and freedom for our own souls. The prison door has swung open.

In the end, forgiveness is simply the cancellation of a debt. Unforgiveness, it’s been said, is like drinking poison and expecting the other to die.

Email ThisBlogThis!Share to TwitterShare to FacebookShare to Pinterest
Labels: Forgiveness