I’m sitting in a hotel room in Dallas thinking about the weekend (Firestarters) and what I wish I could have said. Because of our quest for the elusive fifty-five minute celebration (trying to cram in three celebration start times between 9 and 11:45 on Sunday is a challenge), sometimes there simply isn’t time to unpack a particular point. I would have liked to talk a little more about the idea of safety in relationships. It wasn’t critical to the main thrust of the message, but it left some things unsaid.

I mentioned that many of us at VCC came from messy family systems with varieties of dysfunctions that make us nervous about any real depth of relationship. But in this New Family that God was forming, there should be a sense of safety. Otherwise, we can’t admit our failures or shame without fear of judgment or rejection. Without safety, there’s no real intimacy or depth of relationship.

Months ago I was both amused and sad when I got an email with “Bless me, Father…” in the subject line. It began with:

“I have a confession. I have been at the Vineyard for years. I still am not a Republican. Is there a Growth and Healing group for me? I'm being obstinate here, but I was there in the conservative church in the early to mid-60's. The MLK video triggered some flashbacks. I admit I don't understand the attraction of the right wing for evangelicals. I also know that even discussing political issues can painfully divide churches. I don't even admit my political views to my small group, who know more about my dirty secrets than anyone else. My casual friends know I voted for Obama, but my small group leader said they thought it possible that Obama is the Anti-Christ. They really said that, and they’re one of the most caring and sincere people I know.”

Obviously, some tongue-in-cheek, but between the lines is real pain. They went on to write:

“Sometimes hesitate to invite my liberal friends. I still crave acceptance from other people and I'm afraid to leave my particular ‘closet’.”

Regardless of your personal politics, that seems sad to me that they don’t feel safe in their group. As many of you know, the Vineyard works really hard to be apolitical; the staff is a mix of backgrounds, sensitivities and politics. What’s more, because of our high value for recovery ministries and the power of redemptive, restorative and reconciliatory relationships, we deeply understand the need for safety, transparency and vulnerability in order to be whole people. I find it fascinating, though, that because of our politicized and polarized culture, someone can feel free enough to expose their deepest secrets but scared of admitting a particular political slant even in passing…for fear of rejection and reprisal.

Jesus told His disciples that people would know they belonged to Him because of their love for each other. The kicker?—they were a diverse group of personalities with extremely different political views and socio-economic backgrounds. But God’s New Family would reflect His Kingdom…and the evident power of the Holy Spirit to tear down walls that separate us—whether they are walls of ethnicity, race, politics, education, gender or whatever. Or as the apostle Paul would say, In Christ’s family there can be no division into Jew and non-Jew, slave and free, male and female. Among us you are all equal. That is, we are all in a common relationship with Jesus Christ. (Galatians 3:28 Message Version).

And so when we invite outsiders to our gatherings, there is an obvious message that goes beyond words and slogans. Imagine a spiritual family that includes men and women, the wealthy and the under-resourced, Republicans and Democrats, blacks and whites, singles and married, young and old, all broken and bruised…all in the process of healing and reconciliation. What do you think that would communicate? I believe people are longing to belong to a real family.

There was a long history of racism and hostility between Jews and Gentiles in the Roman Empire. It had sociopolitical and religious roots…those are two strikes right away. In the second half of chapter two in Paul’s Ephesian letter, he doesn’t sweep any of this under the rug but fully exposes it. And at the same time, he doesn’t avoid the chosen status the Jews had in their covenant with God, and that those outside of that covenant were truly lost and apart from intimacy with God.

But Paul understands that a new covenant has been made, a covenant that makes the old one obsolete, as the author of Hebrews writes (Hebrews 8:13). God is doing something radical in the human race…and Paul outlines it further in Ephesians 2:

For Christ himself has made peace between us Jews and you Gentiles by making us all one people. He has broken down the wall of hostility that used to separate us. By his death he ended the whole system of Jewish law that excluded the Gentiles. His purpose was to make peace between Jews and Gentiles by creating in himself one new person from the two groups. (Ephesians 2:14–15 New Living Translation)

Safety is critical if we really want to grow as Christ-followers. How are you on the safety scale with others? Are you a safe place, a city of refuge?
.
Posted by dave workman at 12:54 AM 15 comments: 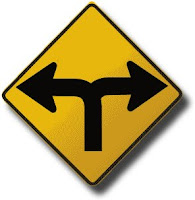 Maybe in my old age I’m getting wistful, but lately I’ve been thinking a bit about choices I’ve made over the years. And why some of them have been repetitive… good and bad. Especially in light of our series Perfect Takes Practice that Joe Boyd wrapped up this weekend.

Just prior to his death, Moses addressed the nation of Israel. They were about to enter into some real estate that God had promised years before. Moses knew that the only way they would be successful in settling it would be if they continually chose to live for God and follow His ways. Sadly, he also knew prophetically they would not. And so with a philosophical “Whatever...”, he gives them a simple encouragement regarding their choices:

“… I have set before you life or death, blessing or curse. Oh, that you would choose life; that you and your children might live! Choose to love the Lord your God and to obey him and to cling to him, for he is your life and the length of your days.” Deuteronomy 30:19, 20 Living Bible

A few verses earlier he put it even more succinctly. To paraphrase, “Because you are made in God’s image, you have this remarkable ability to choose between life and prosperity or death and destruction.” Living our lives for God and the resulting wholeness is a continual string of choices. Moses is simply saying that a full life is largely about choices.

C. S. Lewis made a classic comment about this in his little book Mere Christianity that has stuck with me for decades:

“…every time you make a choice you are turning the central part of you, the part of you that chooses, into something a little different from what it was before. And taking your life as a whole, with all your innumerable choices, all your life long you are slowly turning this central thing into a heavenly creature or into a hellish creature: either into a creature that is in harmony with God, and with other creatures, and with itself, or else into one that is in a state of war and hatred with God, and with its fellow creatures, and with itself. To be the one kind of creature is heaven: that is, it is joy and peace and knowledge and power. To be the other means madness, horror, idiocy, rage, impotence, and eternal loneliness. Each of us at each moment is progressing to the one state or the other.”

With that in mind, consider the absolutely PC-less comment Jesus made to a hurting man in Jerusalem: 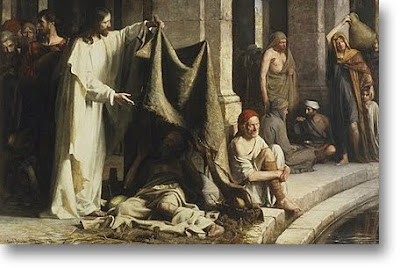 Some time later, Jesus went up to Jerusalem for a feast of the Jews. Now there is in Jerusalem near the Sheep Gate a pool, which in Aramaic is called Bethesda (Bethesda means “the house of kindness”) and which is surrounded by five covered colonnades. Here a great number of disabled people used to lie—the blind, the lame, the paralyzed. One who was there had been an invalid for thirty-eight years. When Jesus saw him lying there and learned that he had been in this condition for a long time, he asked him, "Do you want to get well?" John 5:1-6.

Excuse me, but shouldn’t that have been obvious? Really? After all, wasn’t the man at the “healing waters” of the House of Kindness?

Get the picture: There could have been hundreds of people lying about this natural spring waiting to be healed. The rumor was that the water rippled ever so often when a supernatural being touched it…and the first ones in would get healed. When Jesus arrived, he headed for one person in particular, a man disabled for nearly forty years. His muscles would have atrophied to the bone. It’s obvious what’s wrong, but there was something deeper. And so Jesus gets to the core of the problem with a simple question: “Do you want to get well?” There is a flash of divine psychoanalysis. “You need to be whole. Do you want to be whole?”

As harsh as this may sound, many of us have problems that we don’t want to get rid of. There are varieties of Biblical ways to get rid of them: restitution, forgiveness, confession, repentance and so on. All of them require being painfully honest. I feel on a regular basis that God asks me, “Do you really want to get well?” There are those of us who will not—do not want—to be healed of our emotional stuff. Our identity may be wrapped up in our problem. “I have a right to feel like this…this person hurt me deeply…this employer stiffed me…” It gives us an excuse for certain behaviors. Some of us would have very little to talk about if it wasn’t for it.

When I was a little kid, if I got sick enough to stay home from school, mom had a routine. For some reason, Campbell’s chicken noodle soup and a laxative were always involved. It didn’t matter if you fell off the playground slide and your collarbone poked through your skin, you had to take laxative. For mom, it was like “digestive bloodletting”. But she also had this wonderful tradition of going to the corner drugstore and buying a comic book for me to read while she worked if I was sick at home. Sometimes I’d just act sick to get a new comic book, in spite of the laxative.

And despite how we may want to redefine heaven and hell, it seems they still have more to do with our choices than we dare to admit.

I think many of us would find it easier to blame God.
.
Posted by dave workman at 4:07 PM 2 comments: