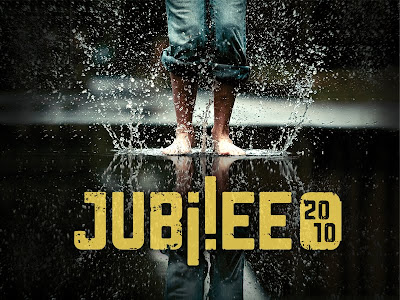 This weekend we launched the Jubilee 2010 series. We’ve come to the end of our three-year pledges for the Luke 4 Challenge.

Things have been going remarkably well…and believe it or not, that usually makes me nervous. I’m the type of personality that thinks, as my mom in Kentucky used to say, “Don’t count your chickens before they hatch”. Okay, so it’s not like we’re hatching anything, but I think I tend to get a little concerned when things are going well. Sheesh. Chock it up as another one of my dysfunctions.

What’s more, I tend to get nervous about celebrating things. It’s part of a “small town”-mentality that’s imprinted growing up in the Mayberry-world of Augusta, Kentucky: don’t get all uppity. And don’t blow your own horn. That would be okay if you knew how to play a horn, but as we’ve said around VCC for years, “We’re not that smart. This has to be God.”

In the six Easter celebrations, we had over 10,300 people show up. But better, about 1200 of them decided to recommit their lives to Jesus and, along with Discoveryland, about 300 more gave their hearts to Jesus for the first time. That’s pretty amazing. Then the following weekend Wess Stafford spoke. Wess is the president of Compassion International and spoke at the Leadership Summit last year. His team brought some children to sponsor and nearly six-hundred were picked up. That’s fairly amazing too.

And now we’ve come to the time when we should celebrate the outcomes of the Luke 4 Challenge. The Healing Center has only been opened less than two years and yet offering forty unique services for over three-thousand people a month through five-hundred volunteers and a dozen staff members. Or the Student Union experiencing sixty-percent growth with six-hundred students each week and soon to open one of the largest indoor skate parks within a hundred miles. Or the sixty-five wells drilled around Jos, Nigeria, providing clean accessible water for over 35,000 people. Only God can pull this stuff off. And I’m pretty sure it’s not because of some “great faith” on our part.

But even listing these things seems weird, no matter how simply intended for Vineyard folks to be able to celebrate. It can feel like “blowing your own horn”. I’ve long felt the tension between these two verses:

“Take care! Don’t do your good deeds publicly, to be admired, because then you will lose the reward from your Father in heaven.” (Matthew 6:1)…and…“In the same way, let your good deeds shine out for all to see, so that everyone will praise your heavenly Father.” (Matthew 5:16 NLT)

Yeah, I can exegete them and get some clarity, but these verses slice deep into our psyches and motivations. Tricky stuff. Even writing about this feels odd.

But I think the thing I do like to celebrate is when a creative idea of grace pops up.

At the close of the Luke 4 Challenge, it turns out we ended with about a four-million-dollar gap. Though 12.8 million was pledged, the recession that soon followed wiped a number of families out, many lost their jobs and others saw their income shrink significantly. At this point, a little over ten million came in (wow!), but with an 11% overrun in projected cost, we find ourselves in a gap.

So as we launched into the celebration of Jubilee 2010, thrilled with what God has done, we sensed Him leading us this way: the Jubilee in Israel (intended to be celebrated every fifty years) was an outrageous act of justice and mercy—all land was given back to the original owners, all debts were forgiven and all slaves were set free. Or as it says in Leviticus 25:11: proclaim liberty throughout the land to all its inhabitants (that verse is actually inscribed on the Liberty Bell in Philadelphia).

And that’s what got us: let’s totally forgive anyone’s Luke 4 Challenge debt. Here’s what I said in the celebration:

“If you were one of those folks who weren’t able to complete your Luke 4 Challenge commitment—no matter what the reason was—I want you to know that all sense of indebtedness is wiped away. It’s okay. Really. You’re free from it, no kidding. I want you to be able to really celebrate without any sense of guilt or condemnation or whatever. Okay? I’m serious. It’s the Jubilee at the Vineyard: you are free from your pledge; it’s all expunged. No one is second-guessing you. I want you to be able to walk in here with absolutely no guilt and just have fun in celebrating what’s happened: Guilt-free. Is that clear or do I need to say it again? It’s Jubilee 2010!”

I had numbers of people Facebook me and tell me how liberating that was. One woman stopped me between celebrations and started crying; she went through a divorce two years ago and was unable to complete her pledge. She told me she felt guilty every time we did a Luke 4 update. She wanted to celebrate but felt ashamed and like a failure. Then she asked me, “Did you really mean what you said?”

And since about two-thousand people have come to VCC after we started the Luke 4 Challenge, we’re praying that many will pick up the slack…as well as folks who didn’t jump in the first time and veterans who want to be part of it again. New pledges just through the end of 2010 and then we’re over. I want everyone to have the opportunity to be a part of something bigger than themselves.

I love real freedom. And I especially love extending it to others.