Okay, I’m writing something before the weekend. But there was an interesting essay from rock-star-preacher 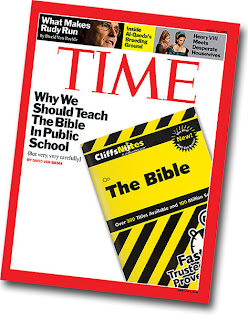 Bono in last week’s Time magazine (and how about that for a provocative cover story?—not bad, actually). And I promise this is my last Bono quote.

He gives a little encouragement on how Europe has to help its southern brother Africa. He writes:

“Our humanity is diminished when we have no mission bigger than ourselves…[has he been watching VCC’s celebrations…?]. And one way to define who we are might be to spend more time looking across the eight miles of Mediterranean Sea that separates Europe from Africa.”

He goes on to say:

“…As individual nations, we may argue over the garden fence, but when a neighbor’s house goes up in flames, we pull together and put out the fire. History suggests it sometimes takes an emergency for us to draw closer. Looking inward won’t cut it. As a professional navel gazer, I recommend against that form of therapy for anything other than songwriting. We discover who we are in service to one another, not the self.”

But he does have a killer voice. Both musically…and prophetically.
Posted by dave workman at 9:40 AM 1 comment:

Healing, particularly healing for the physically sick, is an emotionally charged subject. And it still is for me.

I’m a product of the Jesus Movement of the early 70’s…hippies, druggies, musicians, artists by the thousands were coming to Christ across the U.S., an alternative culture that had shrugged off the mores of the previous generation. Tune in, turn on, drop out. If it was mainstream, if it was the establishment, I wanted no part of it. The Vietnam War was in full blaze and a mandatory military draft in place. Every year a lottery of birthdates was held; my number was 162. Massive protests were held regarding the war and civil rights; the country was polarized. The Evangelical Church, personified in some ways by Billy Graham, was seen as a

partner with the Nixon administration policies. It seemed like a Continental Divide between the generations. And into that setting swept the Jesus movement and the charismatic movement, crossing over denominational lines and shaking churches all over the world. Who let the hippies in here?

Before I came to Christ, I had rejected everything that represented The Man. I had to unlearn everything, including all the good and bad elements that come with revolutionary rebellion. I stumbled into a Pentecostal church and drank in everything that was offered…including the radical idea that Jesus was still doing the same things, and I mean everything, that He did when He walked this planet. Including healing and casting out devils. Whew.

That required a total paradigm shift for me on every level. Eventually I wanted more, and ultimately thought my church was too churchy, too conventional, too safe. Hey, if Jesus wanted to multiply Wonder bread and Mrs. Paul’s fish sticks, He could do it…if we had faith. I would leave church services and confess my healing, pop out my contact lenses (I can’t read anything unless it’s 3 inches from my eyeballs), and drive home. Frighteningly. Anita wouldn’t get in the car with me. It just seemed to me that if you were going to go for it, go for it. Don’t be double-minded, don’t be wishy-washy.

Okay, I’ve mellowed out a bit. Maybe it’s a thin line between presumption and faith. I went through a period of no doctors, no medicine, no movies, no TV…just Jesus. My dad refused to take medication for his heart (very treatable), and ending up dying from heart disease. I remember seeing him in the hospital before I drove to Orlando to begin a recording session, and he looked at me and said, “This faith thing is different when it’s you.”

That was the last conversation I had with him. He took a turn for the worse within a few days and I flew home to see him. He didn’t pull out. My mom went into shock; she was convinced that dad was going to be healed. It never entered her mind that he wouldn’t. She was like a “faith-bulldog”. But it didn’t happen.

It took me awhile to pray for anyone again. I think I came into a healthier balance. I don’t have all the answers. But I still believe Jesus heals; as a matter of fact, I’m more convinced than ever that He has called us to heal the sick. I can’t read the gospels without running headlong into it. I’m just not as self-assured of the mechanics.

But I now know it has to be driven by compassion. Nothing more, nothing less.

“Heal the sick, raise the dead, cleanse those who have leprosy, drive out demons. Freely you have received, freely give.” Matthew 10:8

Just thought you might enjoy seeing the recap video of the Luke 4 Challenge that was shown at the end of the celebration last weekend. You can check it out here...

That’s the number of dollars committed to the Luke 4 Challenge as of 5pm Saturday afternoon. When Bobby finished the video on Saturday morning, there were still commitment cards coming in, so the video didn’t reflect the latest numbers. 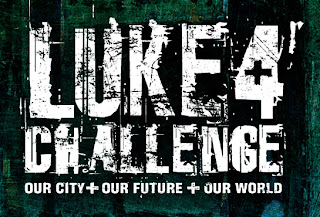 I think if you would have told me ten years ago that we were going to give nearly 13 million dollars to build a place called The Healing Center for our city, drill wells in Nigeria, and create an awesome environment for the next generation, I would have thought, “What are you smoking?”

I have such a mix of emotions right now. I am so impressed by the sacrifices people made toward something that was really outside of themselves, that is, not about their personal need. I’m amazed that people caught a glimpse of a vision and responded. Yesterday I just wanted to pogo during the worship, but I am getting older (and then I think: So?). I also talked with Anita about those who sat on the fringes and really didn’t take part…I wondered how they experienced the celebration. It made me a bit sad. And last, I have to admit there’s a measure of emotional relief…not so much that we made the goal, but that I’m not crazy after all.

But mostly I simply feel awed by God. During the series, I must have read 2 Chronicles 5 a dozen times at home (and chapter 6 isn’t half-bad either—Solomon’s prayer will reorient your neurons…and then what follows in 7:1-3 is mind-boggling…). But I love it when they dedicate the temple—they are so thrilled to have a permanent place for the ark of the covenant (representing the presence of God in their midst)—with all the singers and 120 priests blowing trumpets (you think our worship band is loud?), and then the glory of God fills the temple and the priests can’t even stand up. Now that’s a Pentecostal church-experience.

I really sensed the glory of God filling VCC during each of the celebrations. I don’t know how many people came up to talk to me who were just shaking…no, vibrating…and ready to burst into tears at what they were experiencing.

One of the best was a man whom I had never met before grabbed me in the atrium and said, “I’m seventy years old and I’ve never experienced what you talked about with the Holy Spirit…until today” and then he and his wife burst into tears. He said, “Can you imagine being seventy and never experiencing God like that until now?” I said, “Hey, better late than never!” and I really meant it.

I think this was one for the history books.

…and with them one hundred and twenty priests blowing trumpets in unison when the trumpeters and the singers were to make themselves heard with one voice to praise and to glorify the Lord, and when they lifted up their voice accompanied by trumpets and cymbals and instruments of music, and when they praised the Lord saying, “He indeed is good for His lovingkindness is everlasting,” then the house, the house of the Lord, was filled with a cloud, so that the priests could not stand to minister because of the cloud, for the glory of the Lord filled the house of God. (2 Chronicles 5:12-14 New American Standard Bible)

I’m in Nashville visiting our youngest daughter. I broke the twenty-three day fast with a bowl of vegetable soup and a Diet Coke in a Frisch’s in Louisville. It tasted fabulous! But the sight of hundreds of people coming forward—some coming up as a family, some laughing, some somber, some actually dancing, some stopping and praying—was still buzzing in my head. No kidding. It made me very proud of our church. I love this place.

The most common question I heard was: “Do you think we’ll make it?”…meaning, do you think we’ll actually hit the $12.6 million number? My spiritual history has taken me through lots of different phases, including a time when I was part of the word-of-faith camp. I learned a lot there…but like a lot of our spiritual journey, there is always some unlearning, especially as Jesus continually strips us of our formulaic hearts…because He is all about raw relationship and honesty. Or grace and truth. Always.

Anyway, I never had that “over-the-top” faith-confident “heck-yeah-we’re-going-to-make-it” attitude. I’m not sure if I should have or not. But on the other hand, I haven’t felt anxious either. I guess I just felt like this was God’s idea from the start…and whatever we each sacrificed was just right. And in the end, Jesus can multiply whatever we give.

I had several people tell me they would mail in their commitment card this week…they needed a few more days to make their decision. Plus, in any single weekend we can have up to 25% of our regular attendees missing. That’s probably why our coaches advised us to not make any announcement for another couple of weeks.

One story I wish I could have told was from one of our volunteer teachers who wrote that the kids in her class in Discoveryland were asked to draw a picture of how they imagined the Healing Center. After a while, one little boy named Donavon called her over and said, “I’m trying to draw hope. What do you think it would look like?” How cool is that?

One more: here’s a great picture from a family who adopted a little boy with a missing arm. After the first weekend of the Luke 4 Challenge, he came home, went to his room, and without any prompting wrote this on his blackboard: 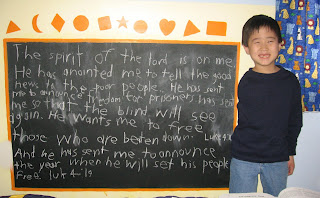 Love to you all. Thanks for being the Church.
Posted by dave workman at 12:09 PM 5 comments: