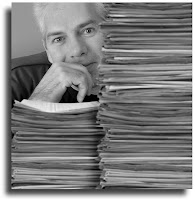 Hello blog. I’ve been away for awhile. Okay, a long, long while.

I think I‘ve been going through one of my deconstruction phases where I question how valuable certain activities are. But instead of just questioning, I shut down for a while. Ditto for Facebook.

Back in the day when I actually used paper (I’ve been nearly paperless for years; my last holdout was books. After getting a Kindle 2 last year, I haven’t bought a tree-based book since; magazines are still an issue due to a graphic-geekness addiction I can’t shake off. Give me two more iterations of iPads, and I’ll be a good little consumer), I would periodically end up with neatly ordered piles of papers on my desk like mini-skyscrapers. I had a couple of filing cabinets, but they were filled. There was an intuitive methodology to my stacks, but it had one major flaw: I’m a neat-freak when it comes to workspace. Clutter distracts me. It paralyzes me. I can’t explain how it disrupts my mental feng shui. For me, it feels exactly like trying to sleep when I have a dozen issues swirling around in my head that have to be dealt with…and the only way I can sleep—and by the way, prayer doesn’t help me—is to actually get out of bed, flip my Macbook on, and exorcise them to my “to do” list. The insomnia mysteriously fades away.

Anyway, one day in utter frustration because of the piles on my desk, I retrieved a huge shopping bag, placed it on the floor at one end of my desk, and with a simple sweep of my arm, pushed everything over the edge into the bag and carried it to the trash. I felt liberated. Free.

Obviously there are some flaws to this system. Duh.

But my theory was, if no one screamed within the next week or so, it must not have been that important. I even had a scriptural basis for my action:

Yet when he heard that Lazarus was sick, (Jesus) stayed where he was two more days. . . . On his arrival, Jesus found that Lazarus had already been in the tomb for four days. (John 11:6, 17 NIV)

Okay, so it’s a different context…and there was a warrant out for Him in Jerusalem…plus He’s the Son of God and already said this was going to express the glory of God in the end. But gee, other than that, He seemed to take an unhurried, uncluttered approach to the whole thing. He didn’t seem frantic and overloaded. So maybe it’s a weak scriptural position, but it did make me feel better.

Anyway, no one screamed…and I developed a new way of regularly shaking the proverbial Etch-A-Sketch upside-down. It was the Workman Shopping Bag Office Management System®. Stephen Covey, step aside; a new sheriff’s in town: I discovered the eighth habit.

And I felt better.

That was many moons ago. But now we live in this fabulous world of zeroes-and-ones and laptops. After developing a simple but effective virtual filing system and demanding that I don’t want anything given or sent to me if it’s not digitized, I have achieved a Zen-like state of clutterlessness. And, of course, I regularly back up, both at home and at my office. And don’t even get me started on the beauty of various search functions.

Anyway, part of being away was a wonderment if I was a contributor to The Clutter…you know, that seemingly endless stream of information and chatter that batters us daily. So when I shut down my little blog, nary a scream was heard. Okay, one query…to which I embarrassingly didn’t respond. But I wondered if my little contribution to the blogosphere was just creating a pile on someone else’s virtual desktop or, even more inwardly-focused, if it was just adding another pile to mine.

Here’s what I’m struggling with: it’s not just the clutter, it’s the dilemma of choosing what to look at. I think the most difficult thing we swim in daily without an awareness of the wetness is the innumerable little choices we make every hour. When my friend Emmanuel first came to America from Jos, Nigeria, he was paralyzed the first time he walked into a supermarket to simply buy some tea, facing shelf after shelf of selections and types of teas. He said it took him weeks to get the courage to go back. Simply listening to music on my iTunes requires effort to choose from the hundreds of artists there; and my collection is miniscule compared to my friends. I think there’s a reason why twenty-somethings are being stereotyped as non-committal—perhaps they have been enculturated, immersed and overwhelmed in a tsunami of choices and don’t even realize they’re keeping their options open simply because they can. It’s the water they swim in.

The hot new algorithmic engines are the software services that make choices for you based on your history of surfing and selections. Netflix recommends movies to me. Google advises me on news stories. Pandora chooses my radio listening. Amazon recommends products. Kindle offers books based on my likings. YouTube suggests videos. In The Art of Choosing, author Sheena Iyengar writes that fifteen years ago there were a half-million consumer goods for sale in America. Today, Amazon itself offers twenty-four million.

Think of a person in the first century. Heck, even one just a hundred years ago. The exponential increase in the amount of information that necessitates choice-making is bewildering. It’s been estimated that a single issue of the New York Times contains more information than a seventeenth-century Englishman would have in a lifetime. I think it hugely impacts our culture’s approach to choosing to follow Jesus; it’s obvious how critical the wooing of the Holy Spirit is in that process.

Anyway, if you’re still reading this, I’m actually a bit discombobulated that you would choose to do that. I’m still wrestling with whether I want to keep adding to the pile…and if I'm part of the solution or part of the problem.