This was the last weekend for our Outward Focused Life series. It ended with a big volunteer fair with opportunities to plug into ministry and serve others.

Had I more time, I probably would have talked a bit about what deters us from being servants. There is an element in our fallen genetics that resonantly whispers with Milton’s Devil in Paradise Lost: “Better to reign in hell than serve in heaven.”

I think we’re easily deceived with this one. It’s my daily challenge, frankly, in a thousand little decisions. Or a million points of darkness. I lose sight of the freedom servanthood gracefully brings. There is a false freedom that enslaves me.

One day while sitting at a traffic light I noticed a man walking across a field at the VOA Park with a big Labrador dog. This dog seemed to be having a spectacular time running around him. He appeared thoroughly thrilled to be there with his master, circling him, panting, and ready to do whatever the master wanted to do. There was no leash, but the dog was staying tightly close and apparently having boatloads of, uh, dog-fun.

My Shih Tzu dog, Lucy (don’t laugh…), on the other hand, will probably never see life beyond her leash. I’m fairly sure she has the I.Q. of a carrot. One day I took Lucy for a walk around the little pond at the front of our subdivision. For some wacky reason I thought, “I bet if I take her off the leash, we’ll have a bonding moment. Master and man’s best friend, sitting by the pond together watching the wind bend the cattails and the geese fertilize the grass.” In an idealized moment of insanity, I took her off the leash. Lucy trotted a few feet ahead, stopped, looked back at me and then at the street ahead, and suddenly took off like a bullet.

I ran after her, but with no hope of catching up. She shot down the highway veering out in the middle of the street as fast as she could. By this time I’d resorted to calling her every name possible within the ethical parameters of being a pastor and city decency laws. Or in the immortal words of Ned Flanders, “Ding dang doodley darn it.”

Finally, I gave up and figured I’d eventually see her picture on a milk carton. But someone in the next subdivision was able to grab her. By the time I caught up to them, Lucy’s eyes were wild with freedom and her tongue as long as her abandoned leash. But it’s a freedom that could have killed her because she had no clue of the danger of two-ton SUV’s. Or who would feed her. Or the peril of the pound. And don’t even mention vivisectionists.

The leash is for her safety because she won’t listen to the voice of her master.

That’s the difference between a trust-based relationship with Jesus…and religion. The Law is a leash designed to keep us safe and protected. But true childlike trust and freedom is found in the leash-lessness of grace, when we find ourselves satisfied with the voice of our Master, romping in the fields of the Kingdom with Him, fetching whatever He throws and panting for His presence. We trust Him to keep us safe. We take pleasure in His calling our name.

If God asks me to be a servant—to get over myself—do I delight in that…or do I need some cosmic leash?

Maybe it depends on the choices I make today. 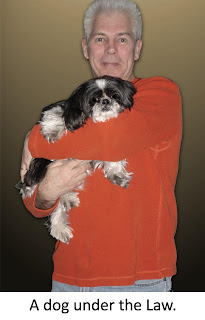 Email ThisBlogThis!Share to TwitterShare to FacebookShare to Pinterest
Labels: Obedience 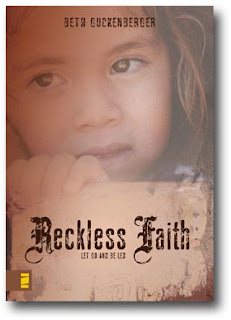 This weekend our guest speaker, Beth Guckenberger, told her story of being available for God to use. For the last ten years, she and her husband Todd have lived in Monterrey, Mexico, caring for orphans there with a ministry called Back2Back. On their own they’re raising nine children, a mix of biological, adopted and foster kids. Beth has written a good book titled Reckless Faith. She describes reckless faith very simply: trusting in the Who when you don’t know the how, the when or the where.

And, typical of the Holy Spirit, it usually starts with small things. A first step. Or as Jesus said in the parable, “Unless you are faithful in small matters, you won’t be faithful in large ones.” (Luke 16:10a NLT)

I was driving home one Saturday night at eleven o’clock after a long workday when I stopped at a gas station. After I paid for my gas and pulled away, in the corner of my eye I noticed a car in the lot with the hood up and two guys watching a smoking engine. As I drove home these words dropped in my mind: “Go back. They don’t know anyone in this city.” My first thought was “Get behind me, Satan.”

Okay, maybe I’m exaggerating a bit. But I did immediately think, “I’m beat. And I’m going home. Besides, it’s two guys—they can figure it out. That’s what guys do.” I knew this wasn’t totally true. I’m a guy and I don’t know anything about cars except that when they break down, it’s your testosterone-driven duty to raise the hood and squeeze the hoses to feel good about yourself, especially if your wife or girlfriend is around.

Anyway, I turned around begrudgingly, and discovered that one of the guys was just helping out. He said, “It’s probably your thermostat” and walked away. The owner of the car had his wife and little boy with him. It turned out they had driven from Zanesville, Ohio to Cincinnati to see a Reds game—about 150 miles away. He looked at me and said, “We don’t know anyone here.” I thought “God, you sure know how to meddle.” I drove them around and, believe it or not, found an auto parts store open until midnight and bought a cheap thermostat. That was the problem and he took off. Before he drove off he told me he was raised in a pastor’s home. Then he said, “I knew God would find someone.”

I can't even imagine how God does this stuff.

Email ThisBlogThis!Share to TwitterShare to FacebookShare to Pinterest
Labels: Obedience

Just a quickie for insiders at Vineyard Cincinnati. We are without power because of Sunday's storm...still. The main campus building, the Resource Center, The Healing Center and Student Union buildings are still without electricity. It also means our email and phone systems are down as well...so virtually no communication is possible. I'm still without power at home, so I'm sitting outside of Panera's running on batteries. If you're a bit confused why folks at VCC have been incommunicado, that's the deal; the phone system defaults to a busy signal. Thanks for understanding...we can't be open until we have power.
Posted by dave workman at 11:09 AM 1 comment: 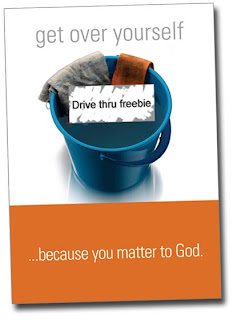 This weekend we passed out our “Get Over Yourself” scratch-off cards. The vibe was electric. It was a real scratch-off with varieties of different outward-focused ideas to serve others. Everyone took one…and had to do whatever it said. Already people were having a blast.

One woman told us she just laughed when she scratched off hers. It read: “Free ice cream! Give it away.” At the outwardfocusedlife.com website were further instructions: “It might be easiest if you buy some gift cards from the local ice cream parlor, but giving away free ice cream in this heat is as easy as giving away free ice cream in this heat.” Turns out she actually owns a popular soft-serve ice cream stand and it was their last day of the season to be open. Believe it or not, she gave everyone a free ice-cream—all day—and taped the card on the front of the ordering window. Wow.

Another person told me after one of the celebrations that she knew exactly what her card would say before she scratched it off. She even told the people sitting around her. They asked, “How do you know?” She laughed and said someone had given her a $25 Shell gas card this past week. When she tried to use it, every Shell station she pulled into was closed. She thought, “Hmm. God, am I supposed to give this away?” So she knew her card was something about gas. She scratched it off and it read: “Gas Card Giveaway.” She pulled her card out of her purse and showed me. I, the Great Man of Faith, said, “No way!”

This weekend in The Outward Focused Life series I talked about attitude (“Your attitude should be the same that Christ Jesus had.” Philippians 2:5 New Living Translation). There was another aspect that I didn’t have time to cover; it’s an area that I totally suck at. When we understand we’ve been sent to serve God and others, we begin to change the way we talk. A servant—or more correctly, a slave—has nothing to prove. And so Paul writes: “Do everything without complaining or arguing…” (Philippians 2:14 New International Version).

A servant is free from the need to “one-up” someone, to prove something, to blow his own horn, to be right, to outclass anyone. They already know who they are: a servant to the Creator of the universe. You can’t get a better gig than that.

Here’s my “Mr. Obvious” observation: grumbling and complaining is rampant in the Church. Heck, it’s rampant in me. James said that our tongue is like the tiny rudder on a huge ship—and sets the direction for our whole life. Our words are way more critical than we imagine. Proverbs 18:21 says: “Words kill, words give life; they're either poison or fruit—you choose” (Message Bible). Talk about “small things”.

I regularly forget that there’s a connection between my attitude, my words and my faith. A negative attitude can reveal a lack of faith…and a lack of faith can be exposed by our words. The Israelites were outed by their own words. It happened not long after the escape from Egypt. It reads in the Psalms: “The people refused to enter the pleasant land, for they wouldn't believe his promise to care for them. Instead, they grumbled in their tents and refused to obey the Lord.” Psalm 106:24-25 (New Living Translation). A whole generation died out without receiving the promise. Scary.

What do you find yourself grumbling about?—Finances? A relationship? Your job? It may very well be an indicator of a lack of faith, a refusal to believe God’s “promise to care” for you. And so we grumble in our tents. Seems to me that’s a bit dangerous. Some of us are probably forfeiting “the pleasant land” of God’s peace and rest because of our propensity to complain and focus on the negative.

This isn’t a matter of lying about how you feel or walking around in some state of denial. It’s not about maintaining a legalistic “positive confession.” I’ve been in that tribe; it will wear you out.

But sooner or later, as Jesus put it, “Your words show what is in your hearts.” Matthew 12:34 (Contemporary English Version).
Posted by dave workman at 11:20 AM 3 comments: