This weekend was an out-of-body experience. I was so glad when the last celebration was over. I know I don’t have the gift of martyrdom; I was whining to anyone who asked me how I was doing.

On Friday, Christmas Day, I started feeling like a truck ran over me and my throat began to hurt. Saturday morning I was sure there were tire tracks down the front of me and I was having a tough time swallowing. Anita, being the good wife she is, said, “Don’t be a guy. Go see a nurse.” and sent me to a place called “The Little Clinic” in Kroger’s.

I had never heard of it, but she convinced me that it would be the quickest way to go, especially since I still had a message to write…and to speak that night. So on my way to the office, I swung by “The Little Clinic”.

Turns out that they can do a strep test quickly, no appointments are needed, and you can pick up a bottle of sauvignon blanc, brick cheese and Wheat Thins on your way out. Now this is healthcare that works.

The nurse asked me all the typical questions about any exiting body fluids and so on. My head felt like I was in a fog, so I made up stuff when she asked my medical history. She swabbed my throat, checked my blood pressure, stuck that thing in my ear (a major technological advancement over every other method of temperature-taking), listened to my lungs and my heart, looked in my mouth and said, “’Ewwww! That’s really red,” then said it wasn’t strep: “See, only two lines instead of three on this, uh, thing.”

I told her thanks because of what I do in my job: talk a lot. She asked me what I did and I told her I was a pastor. Turns out she goes to what she described as a “oneness” church. I told her I had some friends in the UPC (United Pentecostal Church) denomination. These are folks who believe Jesus is God…but they’re not Trinitarians. It’s complicated.

Then she asked me what church I belonged to. I told her and she said she had heard of it. Then she asked me what I spoke about last weekend and I honestly couldn’t remember…so I said, “Uh, God.” Okay, chalk it up to head fog, raw throat distraction or viral brain freeze, but that’s pretty embarrassing.

Anyone who regularly speaks wrestles with retention, or “how people learn”. I think that’s why we tell people that this thing that happens on the weekend is not “real church”. “Real church” happens in the framework of community and serving/wooing/healing those outside of the community. 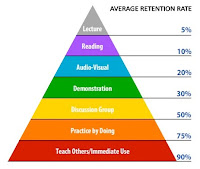 That’s why it’s so important that churches become activistic. Any kind of “doing” connected with input is processed and integrated far better. Years ago the “Learning Pyramid” was promoted by National Training Laboratories and then discredited mostly because of unproven percentage stats (and a dude named Thalheimer who was on a crusade), but I think many educators would agree conceptually with it, though argue about context. Regardless, it’s interesting and from my experience, true. The short version is: people learn and retain information way, way better with “practice by doing” and “teach others/immediate use” than by listening to a lecture or reading.

That’s the reason we never wanted to be just a “come-and-see” church, but a “go-and-do” one as well. For instance, we never wanted ministry to the underresourced and marginalized to simply be a “drop-off-your-offering-for-the-poor”-type thing. We have to personally rub shoulders with the poor to understand the heart of God. Or as we’ve said many, many times: we need the poor more than they need us.

I don’t think we really understand—or integrate the message of the Kingdom—until we begin doing what the Father is doing. I have no doubt that there are too many people sitting in churches that really don’t get it, but it may be that they have done very little of what God says we’re to do, and that ranges from relationship issues (eg. forgiveness) to compassionate service to healing the sick to whatever Jesus did…and does. That’s when real learning kicks in. Or as Jesus put it, “Knowing the correct password—saying ‘Master, Master,’ for instance—isn’t going to get you anywhere with me. What is required is serious obedience—doing what my Father wills.” (Matthew 7:21 The Message).

That verse alone should have the capacity to freak us out, but I’m not so sure that’s the intention. It could be that Jesus was way ahead of the National Training Laboratories folks: we learn best by doing and showing others how to do it.

Anyway, I was back at “The Little Clinic” today. This time whining for amoxicillin. 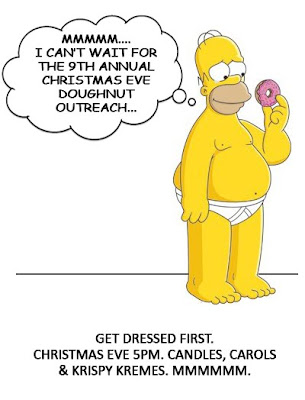 .
Have you heard the news about Tiger Woods?

Yeah, right. I feel like I’m living at IHOT: the International House of Tiger with 24/7 coverage.

What is it that so captures the public’s attention? Like an I-75 car wreck, everything slows down for a potential view of twisted metal and who knows what else. And this is some serious wreckage; when indiscrete relationships hit double digits, you can count on TMZ camping on the doorstep. Pundits have taken potshots at Tiger’s past repeated references to how important his marriage is, with news clips and interviews of him espousing family-first values. Integrity is getting more difficult in a YouTube world. 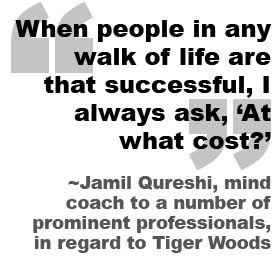 It’s not unique. We could easily alphabetize a list of celebrities who got caught, from actors to preachers to politicians to sports stars to whatever the Kardashians do.

But what the public really loves is to lick its lips over hypocrisy. That’s when we smell blood.

I mean, come on. Even Jesus had his biggest rows with hypocrites. We get the word from the Greeks who used it for stage actors…a person pretending to be someone they aren’t. Jesus jumped all over that. And that’s where the media pounces: when someone espouses a view or projects a persona that turns out to be the opposite of what they say.

I think we come at this from one of three angles:

1. When someone preaches a value of virtuousness, it reminds us of how we fall short, and so we all nod like third-graders in feigned-serious agreement with a teacher’s lecture—we don’t want to be found out. Therefore, when someone stumbles publicly, we feel relieved that no one is really that perfect.

2. Or there is something grossly evil in us about secretly wishing for someone else’s downfall. It’s gossip, one-upmanship and wickedly appealing. As C. S. Lewis wrote, “How difficult it is to avoid having a special standard for oneself!”

3. Maybe we really want to see someone be true, virtuous and integrous. We want to believe that someone out there is actually who they say they are. Maybe we’re tired of people copping out with, “I’m an ______ (actor, athlete, politician, etc.), not a role model”, and wonder if there’s anyone who can step up to the plate and say like Paul, “Imitate me, just as I also imitate Christ”, or at least some secularized version of that. That’s gutsy.

It may be that whatever view we hold is dependent on how aware we are of our own brokenness or how hungry we are for “righteousness” (now that’s a quaint idea in the 21st century…). One thing for sure, Jesus has a lot to say about secret lives. Interestingly, He encourages a secret life when it comes to righteousness…and discourages any secrecy with our brokenness and sin:

“But when you give to the needy, do not let your left hand know what your right hand is doing, so that your giving may be in secret. Then your Father, who sees what is done in secret, will reward you. (Matthew 6:3–4 NIV)

…“Nothing is covered up that will not be revealed, or hidden that will not be known. Therefore whatever you have said in the dark shall be heard in the light, and what you have whispered in private rooms shall be proclaimed on the housetops.” (Luke 12:2–3 ESV)

What a different way of thinking. We could probably avoid a lot of heartbreak if we practiced that. But we would do good to remember this: accountability without the pursuit of holiness is silly.