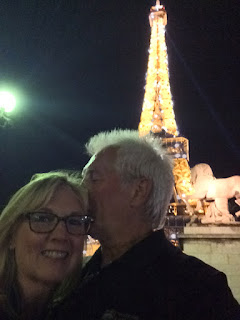 Last year my wife and I traveled to Paris. We walked a million miles around the City of Lights, met wonderfully friendly people who helped us with our pathetic expression of their beautiful language, traveled to the top of the Eiffel tower at midnight, spent an entire day running through every wing of the Louvre, hiked to the top of Montmartre Sacré-Cœur and watched the sun hide behind history, laughed at the tacky, touristy block with Moulin Rouge, marveled at cemetery graves above ground, shuffled through tiny, hidden shops on side streets, awed by the backside of the giant clock like the Hugo movie poster in the Musée d’Orsay, navigated the bustling crowds while staring at our Tripadvisor app, and wished we had another month to explore. I would have never guessed that we could have been the target of the multiple terrorist hits that happened in France this past year, culminating in the loss of one-hundred-and-thirty lives two weeks ago—the worst single attack in Paris since World War II.

Paris captured our headlines (although Nigeria’s weekly terrorist losses outstrip everyone and get little western attention). Even stranger is the reality that Muslims themselves suffer the majority of fatalities from terrorist attacks worldwide, mostly due to terrorism in Iraq, Afghanistan and Pakistan.

But what we really grapple with is simply this: what is going on in the head and heart of someone who cries, “God is great!” while unloading AK47’s magazine after magazine into the bodies of strangers and then detonating bombs strapped to their own torsos to incur the maximum damage a single human being can do? No wonder atheists decry religion and pump their fists in the air: witness for yourself the danger and instability of the religionists of the world. Who wants—or needs—a god of violence in an already fragile world? How can someone coldly execute another while calling of the name of God, the father of compassion?

In the first century, James wrote a generic letter to people who were scattered throughout the Mideast and Asia because of religious persecution:

With the tongue we praise our Lord and Father, and with it we curse men, who have been made in God’s likeness. Out of the same mouth come praise and cursing. My brothers, this should not be. Can both fresh water and salt water flow from the same spring? James 3:9-11 (New International Version)

I certainly don’t have a good answer. I understand resentment and pain, but I’ve never been hurt at a level that caused me to inflict physical pain or torture on another. But let’s be honest: I live in a comfortable first-world culture. ISIS and its grand scheme for an end-of-the-world, apocalyptic unfolding of a caliphate as they believe prophesied, is a complicated mess to undo; no matter what bombs are dropped on their strongholds, it’s much harder to destroy an ideology.

As a Christian, though, I am accountable to God for my own stuff as well as the people that I am in community with. And here’s where it gets weird.

We are quick to take umbrage with the idea—and rightfully so—that it’s morally okay to shout, “God is great!” with our mouths and then blow someone away with a Kalashnikov. And we would disparage the religion of anyone who implies that it is okay to do that. Of course that’s heinous. But what’s puzzling to me is how Christians can forward emails and post on Facebook the most hateful, disparaging things about a government leader, about a celebrity, about a Muslim, about someone we disagree with politically or culturally, and then an hour later post a picture of a scripture about God’s goodness. We seem to forget that Jesus equated the thoughts and intents of our hearts to actual physical activity:

“You have heard that it was said, ‘Do not commit adultery.’ But I tell you that anyone who looks at a woman lustfully has already committed adultery with her in his heart. Matthew 5:27-28 (New International Version)

“You’re familiar with the command to the ancients, ‘Do not murder.’ I’m telling you that anyone who is so much as angry with a brother or sister is guilty of murder.”  Matthew 5:21-22 (The Message)

A few days ago I was tagged by a fellow Christ-follower who posted a picture of President Obama at the podium with a soldier standing next to him holding a Photoshopped gun to the president’s head. The comments basically read: please, put us out of our misery.

Really? Is that our best expression of our Christianity—of our relationship to the God of the universe who loved us when we were going under for the third time in our sins? Is that really what we, the Church, want to shout from the rooftops? Under a corrupt, persecutorial government, the apostle Peter tellingly wrote: Show proper respect to everyone: Love the brotherhood of believers, fear God, honor the king. (1 Peter 2:17 New International Version). Think about that as you forward your next un-Snope-reviewed email of “ressentiment” on your laptop from your comfy recliner while sucking down Diet Cokes and Doritos.

And yet we continue to think and verbalize hateful and vengeful things because we believe we are righteous, truthful and defending God’s honor. Under the probing code of Jesus, do we really think that’s any different than the terrorist chanting “Allahu Akbar” while blowing away a stranger? Frankly, it doesn’t seem to be any different according to how Jesus reads us.

In this long, dry political season ahead, please, Christian, think twice what you publish.

Jesus is watching you. And reading your posts.