why christmas is important. really. 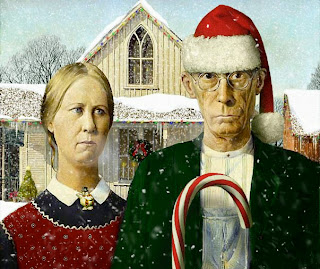 Each year it seems as though the Christmas Wars heat up a few more degrees: churches boycott stores advertising “happy holidays” and atheists file lawsuits about nativities creeping onto public spaces. Evangelicals launch their annual “let’s-put-Christ-back-in-Christmas” campaign (how come no group ever lobbies “Let’s put the x back in xmas”?) while the non-religious smirk at the kitschiness of plastic babies in mangers on front lawns with light bulbs up their butts. Contrarian fundamentalists remind us we don’t know the real birth date and Christmas trees are pagan while bloated malls blast “Joy to the World” in food courts to exhausted consumers. And, obligatorily, Time and Newsweek will offer a controversial cover story about Christianity to amp up December sales.

Like a long-lost Hatfield-McCoy reason to feud, what the heck are we fighting about? And maybe that just clarifies the importance of Christmas: the fact that there is, uh, fighting.

When I was an agnostic, I would flail away at the weirdness of Christmas. After all, gods coming to earth and taking on human form was nothing new. Even more, gods who died and were resurrected was a common myth way before Jesus.

In Surprised By Joy, C. S. Lewis describes a moment when he began questioning his atheism:

“…the hardest boiled of all the atheists I ever knew sat in my room on the other side of the fire and remarked that the evidence for the historicity of the Gospels was really surprisingly good. ‘Rum thing,’ he went on. ‘All that stuff of Frazer’s about the Dying God. Rum thing. It almost looks as if it had really happened once.’ To understand the shattering impact of it, you would need to know the man (who has certainly never since shown any interest in Christianity). If he, the cynic of cynics, the toughest of the toughs, were not—as I would still have put it— ‘safe,’ where could I turn? Was there then no escape?”

No sane historian discounts that someone of some influence named Jesus existed. They may throw out the supernatural elements and relegate accounts to fanciful stories, but clearly someone named Jesus created a stir. And interestingly, only after he died.

But who creates a stir for two millennia? It’s not like an artist who was ignored during a lifetime but whose paintings are later revered. This one made claims not about what he created but who he was. Who does that and is remembered? Who never wrote a word, never traveled more than a few miles from home, had their first trained mentees desert them, and yet changed the course of human philosophy, culture and future? Who changes calendars?

From Bach to Bono and Kepler to Collins and Michelangelo to Fujimura, the arts and sciences are indelibly inked with this man’s influence. Indisputably.

When barbarians overthrew the powerful Roman Empire and destroyed any evidence of literacy, it was Irish Christ-followers—monks—that carefully copied every book, scroll and manuscript they could find, both sacred and secular. Jesus freaks rescued more pagan classics than anyone on the planet, the only ones preserving knowledge in an illiterate, library-less collapsing western world.

Who else has followers that have both caused wars and founded pacifistic movements?

Who birthed Calvin and Wesley? Who has a family as diverse as Roman Catholics and Apostolic Pentecostals? Who provoked comedic movie prayers like: “Dear tiny Jesus in your golden-fleece diapers…”

Whether your list includes the good (hospitals, art, Wilberforce) or the bad (sectarianism, wars, TestaMints