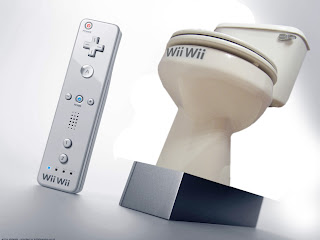 I had some people ask me where they could buy the new Nintendo Wii Wii we premiered this weekend. It’s a totally new way to experience our restroom cleaning outreaches. It’s pretty amazing…you can virtually clean toilets without leaving your couch.

I’m sorry, but the Wii Wii is back-ordered. And even worse, ours broke down at VCC after someone left the seat up.

This weekend I mentioned our big event on December 24th: the 6th Annual Christmas Eve Donut Outreach. Instead of holding a traditional Christmas Eve service, we’ll meet at 5pm, sing a few Christmas carols, light our candles…and then everyone grabs a couple dozen of the 24,000 Krispy Kreme donuts to give away to people who have to work on Christmas Eve.

Two years ago the weather was horrible: about 10 degrees above zero following a foot of snow and ice that dropped the day before. But for the thousand or so people who came, it was a blast. Later we got what I thought was going to be a negative email from someone who went out with donuts. Everywhere this person went—like police stations and video stores and hotels—someone had beaten them there and had already given out donuts. She wrote:

“…We were feeling irritated about our ‘wasted time’. All of a sudden we see an office building with a parking lot full of cars. The door was locked, but we decided to see if we could get a box to a security guard. A guard let us in. When we gave her the donuts and told her what we were doing she started to cry. She couldn’t believe we showed up when we did. Moments before she was sitting alone feeling sad, lonely, and completely forgotten. It turns out she had just moved to town, knew no one and hadn’t had any luck finding a church where she ‘could fit in’. It’s amazing how much power can be held in a box of donuts. A girl far from home at Christmas realized that she had not been forgotten by God…all because someone handed her a box of Krispy Kremes and reminded her that God loves her. She was getting ready to leave the lobby and go on her rounds when we showed up. Had we gotten there any earlier or later we would have missed her. She was still crying when we left, but stopped long enough to ask, ‘Do you think I could go to that church?’ She seemed very excited when we said ‘Yeah, they take all kinds out there”.

Isn’t that a cool email? Who would have thought some donuts would open the door for a “God-conversation”? I could do this every Christmas Eve.

Email ThisBlogThis!Share to TwitterShare to FacebookShare to Pinterest
Labels: Outreach

You own the cosmos—you made everything in it, everything from atom to archangel. Psalm 89:11 (Message Bible)

Think about your house, your bedroom, your pillow. Now imagine you’re an ant…on your pillow. If the universe was the size of the entire earth, you aren’t even to edge of the pillowcase with NGC 3370. And God’s just getting started…the universe is expanding at speeds we can’t imagine. Face it: the vastness is mind-boggling.

For those who believe God launched it all, it completely underscores the Mighty God title Isaiah prophetically gives the messiah (Isaiah 9:6). One look at the sky on a cold winter night convinces them even more: God is omnipotent, spectacular, and beyond description. And even more amazing is that He knows us and loves us. Now that's a Mighty God.

But for others who are wrestling with the God-question, the expanse of the cosmos can have the opposite effect: the universe is so incomprehensibly huge—and we are so small—that we must be insignificant in the whole scheme of things. Somehow size is equated to significance against the backdrop of the overwhelming enormity of space.

When did size have anything to do with attention in matters of love? Did we love a teenager more than a newborn? If one of my children is smaller than the other, do I love them less? Moses spent a lot of time reminding Israel about their covenant with God. At one point he told them:

“The Lord did not choose you and lavish his love on you because you were larger or greater than other nations, for you were the smallest of all nations! It was simply because the Lord loves you…” Deuteronomy 7:7-8a (New Living Translation)

And as we slip into Christmas, don’t forget this classic verse of size and significance:

“But you, Bethlehem Ephrathah, though you are little among the thousands of Judah, yet out of you shall come forth to Me the One to be Ruler in Israel; whose goings forth are from of old, from everlasting.” Micah 5:2 (New King James Version)

ps. I had a number of people ask me about the video at the end of the celebration featuring the voice of S. M. Lockridge. Lockridge pastored Calvary Baptist Church in San Diego for forty years. He died in 2000. Google his name and you can find transcripts and different video versions of what we played.

Also, feel free to link this funny video in your emails: www.vineyardcincinnati.com/play

[I’m so bummed to take so long to write this post. Actually I just got too busy today and realized I hadn’t blogged until this evening. Bloggus interruptus…]

A child is born to us! A son is given to us! And he will be our ruler. He will be called, “Wonderful Counselor,” “Mighty God,” “Eternal Father,” “Prince of Peace.” His royal power will continue to grow; his kingdom will always be at peace… (Isaiah 9:6-7 Today’s English Version) 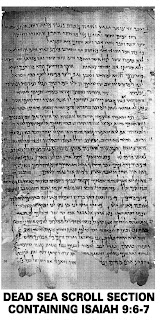 Our new series called The Gift is based on these ubiquitous Christmas card verses. Isaiah’s prophecies are just downright chilling, eerie and profound with predictive force. As a matter-of-fact, some Bible experts and higher criticism scholars believed the book had been tampered with by Christian scribes to make the messianic passages more explicitly Jesus-directed. The discovery of the Dead Sea scrolls blew that away, with nineteen copies of the book of Isaiah radiocarbon-dated between 335 BC and 122 BC. That’s a lot of years before Jesus appeared on the scene. The manuscripts were nearly 1000 years older than any Isaiah manuscripts existing before.

I mentioned in the message that the new Ruler of this coming kingdom was reclaiming the planet:

“When God created man in His image—male and female—He said they were to rule over all that He had created, and were commanded to subdue all creation. Earth was given to them. After Adam and Eve decided Satan had a wonderful plan for their lives, then disobeyed God and fell, they abdicated their role in governance and in essence turned the deed of the planet over to the deceiver. That’s why millennia later when Jesus was being tempted by Satan just prior to beginning His ministry, Satan shows him in a heartbeat all the kingdoms of the world in all their power and glory and says to Jesus, ‘…I will give you all their authority and splendor, for it has been given to me, and I can give it to anyone I want to. So if you worship me, it will all be yours.’ Luke 4:6-7 (New International Version). Interestingly enough, Jesus doesn’t argue that point. He simply says, ‘It is written, worship God and serve Him only.’ The birth of Jesus was an invasion, a hostile take-over, of the earth. That’s why the apostle Paul calls Jesus ‘the last Adam’. As a man—and God—Jesus was taking the deed back. So when Isaiah prophesies that this man-child will be our ‘Ruler’, he’s revealing a Big Story.”

There are actually several different theories as to why Jesus was born, crucified and resurrected…this idea of reclamation and spiritual warfare is just one of them. All have merit; I actually believe there is an element of truth in all of them and they aren’t mutually exclusive. The one I threw out may be a little more controversial, but a verse in John’s gospel lends a bit more credence here:

Now is the time for this world to be judged; now the ruler of this world will be overthrown. When I am lifted up from the earth, I will draw everyone to me.” In saying this he indicated the kind of death he was going to suffer. John 12:31-33 (Today’s English Version)

Three times in John’s gospel Jesus refers to Satan as the ruler of this planet. We might consider this more of an illegal Mafioso power-grab, but regardless of the legalities or whether we consider Satan’s remarks as bluff and smoke-and-mirrors (that would fit the character of the “father of lies” in John 8:44), Jesus still referred to him as the ruler. Even Paul refers to him as a ruler—or prince—and John, in his old age, says that “the whole world is under the control of the evil one”. It sounds a little Star Wars-ish, but this is the original cosmic story, way before George Lucas was a gleam in his daddy’s eye.

And don’t you sometimes feel the gravity of both?
Posted by dave workman at 12:23 AM 4 comments: