Like cold water to a weary soul is good news from a distant land. (Proverbs 25:25)

Hey blogaholics...I'll be gone for the next couple of weeks. Off to drill wells with our trained-and-ready-to-go Self-Sustaining Enterprises team in Nigeria and a gang from the Vineyard. We'll be hooking up with our friends at Back2Back as well. We'll be meeting with church leaders in several cities and who knows where we'll speak. Looking forward to seeing what God does. Pray for us; there are sixteen on the team from VCC. Hey, it takes a church to raise a village.

And I'm sure we'll come back with a high-tech slide projector show.

But while I'm gone, Joe Boyd will be a force to contend with in the Chuck series, fearlessly challenging us with Ruth and Gideon. Be sure to check out his comments at Rebel Pilgrim...always personal and thought-provoking.

And don't go easy on him...treat him just like you treat me.

Peace.
Posted by dave workman at 12:38 AM No comments:

Email ThisBlogThis!Share to TwitterShare to FacebookShare to Pinterest
Labels: Outreach

Maybe this should be called: What I Shouldn’t Have Said.

I’m a bit of a stickler for details. I really don’t like to tell a story unless it’s verified (and I don’t like embellishments). And I don’t like to use quotes if I don’t know a bit about the source. And I try hard to get dates right. Etcetera etcetera...

So some of you can check out at this point if you’re not into, er, details. But two weekends ago I made a point about Moses that got me researching a little more, and much to my chagrin, it’s not exactly what I had taught. 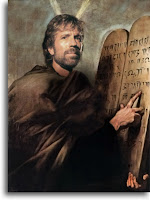 I mentioned that after Moses got mad at the Israelites for partying and screwing around with other gods while he had spent forty days without food or water in the presence of God, he threw down the tablets with the Ten Commandments on them...and they broke into pieces. These were written by God Himself.

Then I said that the next time he received the Ten Commandments, Moses had to write them himself on the stone. At least, that’s what I gathered from this particular passage in Exodus:

Then the Lord said to Moses, “Write down these words, for in accordance with these words I have made a covenant with you and with Israel.” Moses was there with the Lord forty days and forty nights without eating bread or drinking water. And he wrote on the tablets the words of the covenant—the Ten Commandments (Exodus 34:27-28).

God tells Moses to “write down these words”. Then it says, “And he wrote on the tablets…the Ten Commandments.” So what’s the problem? The pronoun “he” appears to refer to Moses, not God, in each translation. And even though in the first verse of that chapter God says He will write the words, it seems explicit that Moses is then instructed to write…and not just the preceding ceremonial and judicial laws.

But in Deuteronomy it records:

At that time the Lord said to me, “Chisel out two stone tablets like the first ones and come up to me on the mountain. Also make a wooden chest. I will write on the tablets the words that were on the first tablets, which you broke. Then you are to put them in the chest.” So I made the ark out of acacia wood and chiseled out two stone tablets like the first ones, and I went up on the mountain with the two tablets in my hands. The Lord wrote on these tablets what he had written before, the Ten Commandments he had proclaimed to you on the mountain, out of the fire, on the day of the assembly. And the Lord gave them to me. Deuteronomy 10:1-4 (New International Version).

I have to go with that. It’s Moses’ own words recollecting the whole event. He’s the eyewitness here. I don’t think there’s a major theological breakdown, but there could be a mishandling of an application if one (like me) pushed the idea that Moses had to carve this one himself. It could lead to a performance emphasis that doesn’t handle grace properly.

So there you have it. And if you made it this far, you might think: “What’s the big deal, Dave? I’d rather talk philosophically than exegetically in this blog. Get over it. Let’s talk about Joshua.”

Uh, I’m out of time now. Talk amongst yourselves…
Posted by dave workman at 6:31 PM 6 comments:

Email ThisBlogThis!Share to TwitterShare to FacebookShare to Pinterest
Labels: Performance 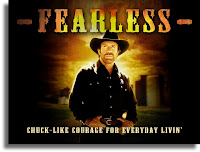 The Fearless series launched with a hefty bang. I didn’t feel like I was particularly engaging/funny (believe it or not, there’s a degree of playfulness that feels critical to me as a communicator) and perhaps a little heavy, but I believe God showed up to make sense of it all. It’s a subject for another time, but it’s really easy for pastors to slip into cranky preaching; it’s hard to describe how weirdly natural it is to preach to the choir. For you church-neophytes, that means telling Rambo-xtians what they think others should hear…and it’s usually about performing better. But I digress.

I would love to do a whole series on Moses. It’s absolutely discombobulating for me how the writer of Hebrews (chapter 11) and Stephen (the Church’s first martyr in Acts 7) describe Moses compared with the Exodus account.

The writer of Hebrews characterizes Moses this way: “By faith he left Egypt, not fearing the king’s anger; he persevered because he saw him who is invisible.” (Hebrews 11:27). But Exodus reports: “The man said, ‘Who made you ruler and judge over us? Are you thinking of killing me as you killed the Egyptian?’ Then Moses was afraid and thought, ‘What I did must have become known.’” (Exodus 2:14). It reads as though the fear factor was higher than the faith factor.

Then Stephen says, “Moses was educated in all the wisdom of the Egyptians and was powerful in speech and action.” (Acts 7:22). But Moses' response in Exodus at the burning bush was: “O Lord, I have never been eloquent, neither in the past nor since you have spoken to your servant. I am slow of speech and tongue.” (Exodus 4:10). Perhaps Stephen wanted us to know Moses was really ducking in Exodus.

I’m no theologian. I gave up on that years ago; nothing as smarmy as a pastor who tries to be smarter than he/she is (“…but the Greek actually says…”). Still, it seems to me that the New Testament writers may have a little different view of faith (not simply a belief system) and more about motivations expressed in actions. The question is: did Moses do that by running from Egypt? It makes me wonder how we define faith in our current church culture. It could be that comparatives are critical: was the desire to go after the “invisible” larger than the fear of being discovered as a defender of the Hebrews? Maybe. Jesus used a hyperbolic-comparative when he described how we are to love him: “If anyone comes to me and does not hate his father and mother, his wife and children, his brothers and sisters—yes, even his own life—he cannot be my disciple.” (Luke 14:26).

Anyway, the two accounts have a unique distinctiveness…and one that should be explored. But you can do that on your own. Next week I’m tackling Joshua. Stepping into someone else’s bigger shoes: I’m familiar with that story.
Posted by dave workman at 10:35 PM 18 comments: