The Bible doesn’t have a whole lot to say about leadership succession. The apostle Paul describes the selection and appointment of pastors*, but the New Testament is curiously quiet about how and when pastors are succeeded.

In the Old Testament, Israeli kings would come and go by appointing their sons, or by a coup d'état, or death or military defeat. In the work of the tabernacle, the Levites did ministry from age twenty-five to fifty, at which time they were to retire from the work (though they could still assist). On the other hand, David ruled for forty years, implying another question: which leadership context is tougher—government or church? Hmmm…

Like any leader, you want to be spending time thinking about the future of the organization you help lead. In one of my favorite leadership books, The Leadership Challenge, Kouzes and Posner write:

“The domain of leaders is the future. The leader’s unique legacy is the creation of valued institutions that survive over time. . . . In fact, it’s this quality of focusing on the future that most differentiates people who are seen as leaders from those who are not . . . It’s something to which every leader needs to give more time and attention.”

I’ve been thinking a lot about the future. I want to see Vineyard Cincinnati continue to advance the mission God has given us way beyond a single generation. And I want to help be a part of shepherding that transition. For a number of years I’ve been concerned about the graying of our church. Our demographic stats are decent in terms of age brackets; you could even call us an intergenerational church. But it’s clear that our largest demographic skews older now, as shown in this graph just over the last eight years (And by the way, if you don’t periodically survey your church, you’re missing a golden opportunity to uncover truth 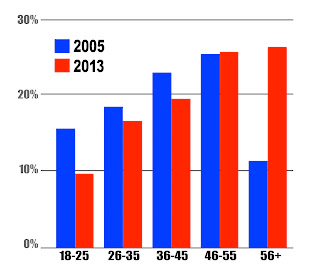 about who you really are; we do an all-church survey every two years. I’ll take facts over anecdotes any day of the week. If you want a copy of our questions, let me know.). And it’s easy to imagine what we would have been twenty-five years ago, when the average age of our leaders was mid-thirties.

My concern with the median age in the Vineyard isn’t about being the coolest church or the Next Big Thing. God never called any of us to be trendsetters; he called us to be faithful. Big difference.

And it’s not simply about dismissing aging Baby Boomers in our youth-obsessed culture. Everyone needs Jesus, no matter what age.

But we all know the reality: churches that don’t reach successive generations will eventually die. And because God didn’t put a time limit on our mission or call us to one generation of fruitfulness, we have to think hard about the future. So about four years ago I got a prompting from the Holy Spirit that I needed to release leadership to the next generation, to step down from my role.

In February 2010, Bill Hybels flew down with a team to tour the Healing Center; they were concepting a “care center” at Willow Creek and were looking at different models. In the car ride from the airport, I asked him for references of successful successions within the Willow Creek Association (10,000 churches globally) and he laughed and told me he could only think of one at that time. This was new territory…and not just for me.

For years, of course, we’ve had an emergency succession plan in place in case I got hit by a bus—and “key man” insurance in behalf of the Vineyard. But we had no real plan if the bus missed me. And so we began to think about how to identify the next senior pastor of the Vineyard. And frankly, for complex organizations, the how may be just as important as the who in terms of systemic health.

After I met with our trustees, we started having heartfelt conversations with our very-gifted teaching pastor, Joe Boyd (who was 38 at the time), about leadership succession. Together we began to work a process to help him discern his future role. After several months of conversations and prayers, Joe opted out and didn’t sense it was his calling, even as much as he loves the Vineyard and Cincinnati and feels called to be here. But being in the lead pastor role was not what he sensed that meant. We all agreed together.

We’ve ended up using a search firm—Vanderbloemen Search Group—to help surface potential candidates for the lead pastor role. We believe this is the first step of a Spirit-led process and are currently in the early stages.

This year I’ll be sixty. I want to be a part of this process and influence as much as needed and required; I want to be around to help make it a great transition. I have no intention of “abandoning the ship”. I want our next lead pastor to be incredibly successful…and to be their cheerleader and get out of the way so they can lead. My role will change: I will not have a senior leadership role, I will not be a trustee, and will serve the next senior pastor with several potential options in a background role. I have a great staff leadership team and a sharp trustee board that comprises the eldership at Vineyard Cincinnati. We’re in a healthy, vibrant place, pedal-to-the-metal on serving and bringing the Kingdom to our city and beyond. This is an ideal time to navigate a transition.

A scripture I’ve been meditating on lately is John 12:24: “Truly, truly, I say to you, unless a grain of wheat falls into the earth and dies, it remains alone; but if it dies, it bears much fruit.” In the end—just like you—I simply want to be obedient to what God is saying, to let go. My walk with Jesus over thirty-nine years has been a fascinating mix of invitation and letting go.

The Spirit-filled Quaker author, Hannah Whitall Smith, who wrote some simple but profound books in the late 1800’s, penned a fascinating essay late in life:

“People talk a great deal about the duties the young owe to the old, but I think it is far more important to consider the duties the old owe to the young. I do not of course say that the young owe us old people no duties, but at the age of seventy I have learned to see that the weight of preponderance is enormously on the other side, and that each generation owes to the succeeding one far more duty than the succeeding one owes to them. We brought the younger generation into the world, without consulting them, and we are bound therefore to sacrifice ourselves for their good. This is what the God who created us has done in the sacrifice of Christ, and I do not see that He could have done less. He has poured Himself out without stint for His children, and we must do the same for ours.”

*The terms pastor, shepherd, bishop and elder are often used/translated interchangeably, as in 1 Peter 5:1,2: To the elders (presbuteros: a senior, presbyter) among you, I appeal as a fellow elder, a witness of Christ’s sufferings and one who also will share in the glory to be revealed: Be shepherds (poimaino: feed, tend as a shepherd, pastor) of God’s flock that is under your care, serving as overseers (episkopeo: bishop) not because you must, but because you are willing, as God wants you to be; not greedy for money, but eager to serve…   (NIV)