the problem with thankfulness

Thinking about thankfulness seems to be the right thing to do at this time of year. But I’m not sure how to balance that in terms of the resources I have. I wrestle with this each time I come back from Nigeria; it’s a little difficult to process the two worlds…I’m so deep into my culture of comfort. I want to be thankful for what I have and I don’t want to feel guilty about what I believe God has given me, but I think there is a third way to look at my resources.

Back in 2005 when I went on the first reconnaissance trip to Nigeria with my friend Emmanuel, one afternoon we drove outside of Jos to a rural village with a tiny church and an even tinier house. Emman wanted me to meet the first pastor he worked under many years earlier. I’ve forgotten his name, but he was quite old. When I asked Emman how old, he could only guess because the pastor himself didn’t know. I found that to be not-so-uncommon among older people there; Emman’s own mother doesn’t know when she was born, day or year. In my hyper-time-sensitive and age-conscious world (as in: “That was so ten-minutes ago…”), I have a hard time wrapping my cerebrum around that.

The pastor was thin as a reed and wore thick black-rimmed glasses. He was so gracious and excited to show me his office and library outside behind the house. It was not much more than a small henhouse, stacked with old dusty magazines and a hanging bare light bulb. I don’t recall seeing many books, if any. These were his references for study.

Back inside his dark and barely furnished house of three simple rooms was a home-made inscription hanging on a wall. I took a picture with his permission. 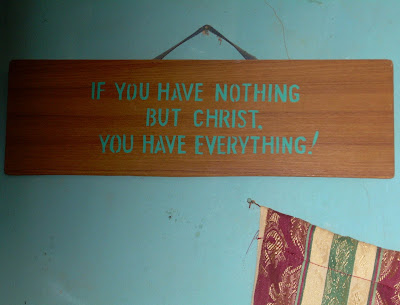 My head was spinning thinking of my dvd players, my office jammed with books, my house with central air, a two-car garage, a gas fireplace and carpet under my feet.

When I return from Nigeria each time, I find myself thankful to be home for so many of the right reasons: I miss my wife and my kids, the Vineyard, my friends. And then there are the creature comforts: I don’t have to worry about the water or eating anything that’s uncooked. I can take a shower and not a bucket bath. I don’t have to worry about traffic jams on roads with no painted lines (which doesn’t seem to matter anyway) and potholes big enough to swallow VWs and hundreds of motorbike taxis carrying three people and a goat zipping by clipping your car mirrors. I can stop anywhere and get a Diet Pepsi that’s cold and with ice. I don’t think twice about basic infrastructures: I know that there will be electricity all day and not just a few hours; the National Electric Power Authority, or NEPA, was cleverly renamed “Never Enough Power Anytime” by the locals. Recently, it’s become the Power Holding Company of Nigeria—PHCN, now known as “Problem Has Changed Names”. Nigerians have a great sense of humor.

But all those things are really just comforts.

On this trip we went back to visit the pastor’s widow. He died a few years after that first trip. Emman gave her a thousand naira, about seven dollars, and you would have thought it was a lottery win. Most days Emman would leave early in the morning to visit extended family and friends and often come home late at night. And many of those, I’m sure, are similar to the visit to the pastor’s widow.

Which brings me back to an angle of thankfulness that I think I’ve overlooked. I’m embarrassed to reach this point in my life and to have missed the obvious: perhaps the point of gratitude is that we’re thankful we have resources…to give. The early church encouraged fasting so they could give to the poor what they would normally eat. Fasts were centered on thankfulness for the opportunity serve Jesus a la Matthew 25:40.

As Augustine put it: “Let the hungry Christ receive what the fasting Christian receives less of. Let the self-denial of one who undertakes it willingly become the support of the one who has nothing. Let the voluntary want of the person who has plenty become the needed plenty of the person in want.”

When Jesus healed the ten lepers and they walked away to show themselves to the priests, one, a Samaritan, came back crying and gratefully threw himself at Jesus’ feet. Jesus posed three rhetorical questions: “Didn’t I heal ten men? Where are the other nine? Does only this foreigner return to give glory to God?”

There is always an end in mind with the works of Jesus: to bring glory to the Father.

When it comes to the apparent “blessings” of my culture, of course I should be thankful. But the question the Spirit is asking me is: to what end?
.
Posted by dave workman at 6:31 PM 1 comment:

Been speaking a lot: today was a 2½ hour class at the Jos Evangelical Church of West Africa seminary with churchplanters and pastors. The class was “The Church, Society and Ethics”. Whoa. Spoke the day before about missional churches and will speak tomorrow at the chapel. It’s been very interactive along with Kande Wilson (our outreach and missions pastor) and Emmanuel Itapson (our connection with Self-Sustaining Enterprises/Nigeria). We also drove out to see the Paramount Chief of the Rukuba tribe; from his throne (no kidding) he again expressed how grateful his people are and reemphasized how there has been no infant mortality from waterborne diseases in all the villages that have boreholes. The drilling team has drilled about 90 wells in the area. Amazing.

The Global Leadership Summit that we sponsor in Jos has gone amazingly well; over 300 pastors and leaders here. Thursday we’ll tack on a training session and we’ll talk about outward-focused churches. We’ve met so many people; they are like sponges, soaking in leadership development resources. What’s amazing is the unity that it’s brought to the different denominations.

Friday we’ll go to the well commissioning and then leave at 6am on Saturday to drive a few hours northwest to Kaduna to sponsor and help with the summit there. Sunday morning I’ll speak at a church there and then head back down to Jos. Last, a three hour drive back to Abuja to fly home.

The rest of the team has been doing great grunt work…painting, moving concrete blocks, working with the drilling team. Yeah, I know—my stuff sounds like a wuss compared to them. They’re doing great and fully enjoying the experience. I think a few are getting their world rocked…and it’s all good. They all served the pastors at the summit here in Jos. Very cool.

These moments make me thrilled to be a part of the Vineyard. I think everyone should feel that way about their respective church. I hope you do. This adventure with Jesus is never boring. Ever. I can’t think of anything in the universe better than serving the One who has a plan for this big messy world and invites us to join Him.

It’s all good. See you at the Vineyard in a week-and-a-half!