the power of your story

Email ThisBlogThis!Share to TwitterShare to FacebookShare to Pinterest
Labels: Evangelism

Recently I had lunch with Clyde Miller. Clyde led me to Jesus nearly thirty-seven years ago. In those days he was pastoring First Christian Assembly of God in Cincinnati where I attended for my first formative four years. My friend Chris Beard is lead pastor there now. Clyde semi-retired, but is very involved in other ministries, vibrant as always and ever the consummate raconteur.
Over delicious coma-inducing giant barbecue sandwiches at Jim Dandy’s, he updated me on what he’s doing. And handed me a small stuffed envelope.

Inside was a series of discipleship booklets he had written. But what I had forgotten was he had asked me to illustrate them…and got me involved in the church as a young twenty-something. A character named Mort became the host for the series. Looking at them now, I had to laugh at Mort carrying a cassette player (and I’m sure I had a similar one that required a couple of D-cell sized batteries!) complete with gigantic headphones with a curly-cord (for those of you who remember telephones that had those). 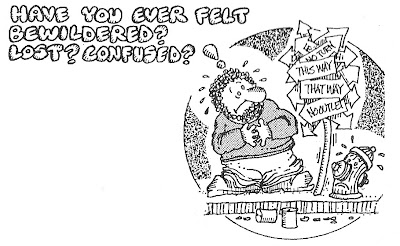 But I was reminded how obvious it was to all of us that after you encountered Jesus, you used anything at your disposal to tell others about Him and offer the first halting steps of discipleship.

They were on the basics: how to receive Jesus, how to pray, what the Church is, how to read the Bible, and so on.
And then I remembered the cultural context that God came crashing into…way back when.
I surrendered my life to Jesus back when dinosaurs ruled the earth in what was called the Jesus Movement. It was an era when God sidestepped the typical church systems and poured out His Spirit on hippies, druggies, musicians, and countercultural misfits who didn’t fit the social and cultural norms of America in that day. An unpopular war and mandatory military draft was massively protested while tens of thousands of body bags were flown home before the U.S. pulled out as North Vietnamese forces invaded Saigon. A burgeoning Civil Rights movement forced states to face issues of systemic racism and the deep poverty in segregated ghettoes. A series of violent assassinations had rocked the nation. The scientific development of The Pill helped unleash a sexual revolution challenging societal norms and raising questions about traditional male/female roles. Then throw in a sudden influx of eastern religions along with a plethora of cult leaders and it seemed as though nothing was assumed and everything was up for grabs.
In that national cultural upheaval, the Holy Spirit suddenly blew across the country shaking every denomination. Suddenly, long-haired, blue-jeaned, tie-dyed outcasts became unlikely evangelists for the ultimate revolutionist, the One who said in reference to Himself, “Have you never read in the Scriptures: ‘The stone the builders rejected has become the capstone; the Lord has done this, and it is marvelous in our eyes’? . . . He who falls on this stone will be broken to pieces, but he on whom it falls will be crushed.” (Matthew 21:42, 44).

Broken people—the very ones that church-people avoided or rejected—were suddenly telling the story of Jesus and how He had transformed their lives. A stenciled picture of a hand with an index finger raised to the sky became the underground logo symbolizing One Way. Jesus was declared as being the Way, the Truth and the Life.
God essentially did an end-run. Anytime the church excludes those in need of grace, God will make His move. And it will come again. Believe me.
Into that backdrop, I stumbled across a few believers who looked like me and who would have had an equally difficult time fitting into the average tidy church. But they beamed the love of Jesus. And when I became a follower of the One who gave His life for me, my life began to change as well. Not overnight. But as weeks turned into months, the awareness of a newly birthed spark of life in my heart met an awakened conscience and the experienced nearness of God. More chunks of my persona were surrendered. I was becoming fully human…the fully human God originally intended.
And it became the most natural thing to tell others about Jesus. It’s simply what you did when you became a follower of Jesus.
I didn’t have all my apologetics sewn up nice and neat (although discovering C. S. Lewis’s writings was life-saving to me personally). I wasn’t the sharpest Crayola in the box. I was still working my way through the Living Bible paraphrase of the New Testament. But I was changing and it seemed right to share that. My life was becoming more real, more open. I was discovering that for those who were like me, who had no clue what the story of the Bible was about except for some clichéd patchworked barroom theology, my life was becoming an open book to be read. I was open to Jesus and others. With each passing year I became less ghostly, more solid. My different personalities that would emerge in various contexts were slowly becoming one.
I was radically changing…and becoming more open.
I want—I need—to revisit that state of mind and heart. I think that’s what excites me about the OPEN journey at the Vineyard—a six-week series designed to help us learn to tell our story, the Jesus-story, and how the two intersect. I’m praying—along with the other churches participating as well—that we have an awakening. And that in our ever-increasing cultural polarization, God would breathe His Spirit across the land…and those who have been rejected would experience the radical rebirth the Cross provides. I want to be OPEN to see, experience and tell that story.
And I don’t want to be quiet.
.