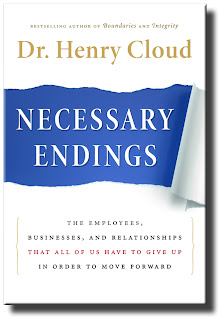 The bulk of this weekend’s message was based on a single chapter from Henry Cloud’s last book Necessary Endings: The Employees, Businesses, and Relationships That All of Us Have to Give Up in Order to Move Forward. Years ago I was in a small gathering of leaders with Henry as he outlined the three types of people that the wisdom books of the Bible depict: the wise man, the fool and the evil man. I found it fascinating. Necessary Endings reflects Henry’s continued foray into the secular book market and toward more leadership/organizational consulting, so it has no explicit references to scripture. We’ve met a few times on the road and hosted his conference at the Vineyard some years back. His work has been extremely helpful to me, both personally and for research purposes.

But here’s the baggage for me.

As a pastor and communicator, the frustration we can feel in tackling a topical series like Baggage about relational dysfunction is simple: a sermon can easily devolve into a list of helpful, prescriptive ideas that any good counselor or therapist would suggest. There’s obviously nothing wrong with that, but as a spiritual leader I have to make sure I balance that with the Kingdom-message that we are meant for more than self-actualization or attaining emotional health as an end in itself. The more is: humbling ourselves and fitting into God’s story and His work.

Part of a sermon like this past weekend—stripped of it’s Biblical moorings—could be a message heard outside of a church without any reference to the work of the Holy Spirit, or as Joe Boyd and I have conversed about, simply a “self-help” message devoid of any necessary interaction with God. The potential is certainly there.

It’s not surprising, though, that a series like Baggage is typically the more popular ones we offer. After all, most people want to know how to get better, that is, better at being a husband, a friend, a mother, an employee, a human being. After all, it’s our relationships that seem to cause us the most pain. And truth is truth; Proverbs was written way before the Stephen Coveys and Dr. Phils of the world.

Some rabbis use an exegetical style called a midrash. An oversimplified description (forgive me, seminarians) would be storytelling that depends less on the authority of the text and zeroes in on the hearer’s intuitive ability and personal reflection created in the moment by the Spirit of God. There can be a potency in the interpretive story that allows God to give insight beyond the obvious, and may even create an inner tension for the listener that forces a deeper wrestling with the text.

Some contemporary teachers/preachers use a therapeutic or prescriptive model, more common to topical series, filled with advice that’s rooted in scripture. It’s a bit like Proverbs: if you do this, you’re a wise person and life will frankly work better for you. This would have been especially reflective of many of the sermon series in the 1990’s: How to Affair-Proof Your Marriage, Building a Healthy Family, Five Steps to Avoid Burnout, etcetera. Not only were they practical and helpful, but they served as an attractional element for un- or dechurched people, as in: “Hey! Finally a church that has some relevance to my life…”. It moved beyond the altar-call, “get-out-of-this-world” salvation-only emphasis of many evangelical churches and created a context for invitation as well as developing emotionally healthier and more holistic people.

But here's a thought: I think the sermon on the mount—Matthew 5, 6 & 7—is actually a prime example of both approaches: midrash and therapeutic. There are moments of super-pragmatic counsel but it’s wrapped in a powerful Kingdom overview that drives the meta-message. The first twelve verses—the Beatitudes—can create an inner conflict that is powerful.

For you fresh young pastors, teachers and communicators, consider a balance in your speaking. Listen to some teachers who are polar-opposite of your style. Think of the differences between Tim Keller and Andy Stanley; both are wonderfully gifted communicators, but radically different in methodology, pacing and approach. Check out people who are not just different from you tribally and theologically, but communicate in a way that you might even preconceive as irritating.

And wrestle a bit with your own exegetical baggage.
.
Posted by dave workman at 9:04 PM 9 comments: